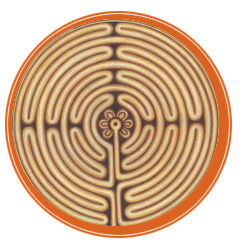 A labyrinth can be said to be the longest path possible within a confined space.

Unlike the maze, in which one may get lost, most labyrinths have a single complicated path within them leading laboriously and inevitably to a final destination. We have seven different styled labyrinths and a medicine wheel on our property- the classic Chartes, the Cretan, the Peace labyrinth, the Heart, Crystal, Pentagram and Octagon.

The classical seven circuit (also known as Cretan) labyrinth is one of history’s oldest and best known symbols found dating from 4000 BCE on cave paintings, coins, and in written history from all around the world.

The labyrinth incorporates many levels of symbolism within its sacred geometry.

The seven rings of the Cretan labyrinth symbolize:
-the seven sacred planets
-the seven days of the week
-the seven Chakras of the body
-the seven principles of the Cosmos.

A labyrinth combines the imagery of the circle and the spiral into a meandering but purposeful path . It represents a journey to our own center and back out again into the world.

Remains of a seven-circuit labyrinth can be found on Mount Knossos, on the isle of Crete.

Labyrinth walking has been called the laying on of feet. One of the most noticeable effects of walking the labyrinth is stress reduction.

Labyrinths represent a way of praying using the entire body.

The personal experience of the labyrinth meets each person where they are and helps them to take the next step.

The labyrinth takes us beyond our limited conscious state to a deeper place of awareness.

We can practice being in the presence of God, Source and pray, or sing and dance.

Use a labyrinth as a spiritual tool to deepen the practice of meditation.

There were numerous medieval Christian labyrinths whose paths meander through four quadrants. The most famous eleven-circuit labyrinth was laid into the Chartes Cathedral floor in France in the early 1200’s. This is the style of the main 88-foot labyrinth in our center. The six petals of the rosette in the center of the labyrinth represent the six realms of Creation. Beginning at the left as you enter and going clockwise are: the Mineral Kingdom, the Plant Kingdom, the Animal Kingdom, the Human Kingdom, the Angelic Kingdom, and the Kingdom of the Unknown. Spending time in each petal helps us connect to healing energies from each realm. 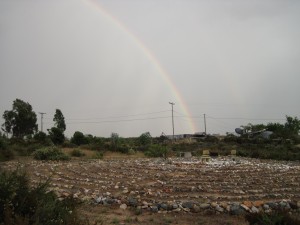 Our largest labyrinth is on a two acre parcel of land next to my house. It is 88 ft in diameter set upon the ground surrounded by native brush. The native flora is tough and prickly on feet, so please wear sport shoes. no bare feet or sandals. The lay of the land has a slight slope. The entire walk is 1/2 mile. 1/4 mile in and 1/4 mile out.

The style of labyrinth is fashioned after the Chartres Cathedral in France. This labyrinth originated in the 1200’s during medieval times and Christians used this labyrinth as their fulfillment of a pilgrimage walk for Jesus. It is a meandering walk consisting of 4 quadrants, 11 circles, and 34 turns. The one path leads you to a center where full moon ceremony will be held where we will cast the circle, honor the directions and burn our weaknesses and wishes. We then go out the way we came in, lightening our burdens and leave reborn.

The labyrinth was first built 15 years ago with blueprint marking paint and a truckload of gravel to mark the path. Time covered the gravel, then rock by rock was lovingly added from places around the world. Some rock collections were donated from estates. 200 lbs of quartz arrived from Arkansas, much of it now covered over by dust. The center of the labyrinth contains 6 petal formations lined with different rocks or crystals. The first petal is lined with shells and lava and represents the first stage of creation, the mineral kingdom. The second petal stands for the second state of creation and is lined with vortex red rock from Sedona, Arizona. The third stage is the animal kingdom and is lined with animal bones and petrified wood. The 4th stage is human creation and lined with tiny people figurines. The fifth stage is the angelic realm and lined with quartz crystal and the sixth petal is labeled THE UNKNOWN and lined with beach rock. Please bring a rock of your own to leave upon the rock path, somewhere, to leave a piece of your energy behind.

You will also find deities representing Mary, Jesus, Buddha, Quan Yin, White Buffalo, etc. This labyrinth is not non-denominational but ALL denominational, All faith is welcome and represented when possible. Also in the center of the labyrinth is a three dimensional Merkaba (Star of David) which is a pyramid up and a pyramid facing down symbolizing male female energies. This chamber is there to be sat in for meditation and strengthening of the aura. RSVP (760) 788 9571

This is a channeled labyrinth having three quadrants and 7 circles. It is 40 feet in diameter and it has a direct path to the center as well as a meandering path from the outside to the center. There is a crystal grid buried in the center that connects to identical grids at the North Pole, the South Pole and Jerusalem. 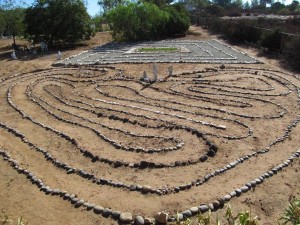 This labyrinth has a feminine energy which is a replica of the labyrinth that Louise Hay designed for her own property. It is built with numerous heart-shaped rocks and beach rocks with sayings from Abraham-Hicks Law of Attraction. It is about thirty feet in diameter, and it is a short walk. 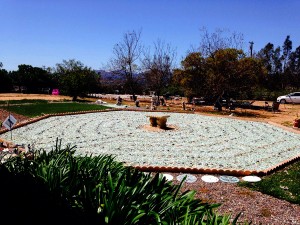 This labyrinth is our first landscape gravel labyrinth directly in front our our house. It is eight-sided, with eight paths from the outside to the center. It is walked for prosperity. 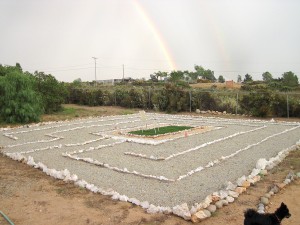 This labyrinth is about 40 ft square. It is our newest addition, landscaped with gravel and glass marbles. It is lined with quartz crystals from Arkansas, Brazil, Madagascar, and California. A special feature is to lay down in the center on artificial grass and feel the direct energy of the crystals. The roman square is a short walk with a wide path, the only labyrinth that can fit a couple arm-in-arm. This design could be found inscribed on ancient Roman coins.

This labyrinth has five sides and five paths.  The Pentagram, found at the center of this labyrinth, was used in ancient times as a symbol of health and protection.  Safety comes from within you: find your safe place within yourself.  The animals and other beings lining the path are also there for your protection, and to bring you closer to Gaia.

The Cretan is the classic seven circuit labyrinth.  Ancient Crete is famous for this labyrinth- it appeared on their coins ca 1200 B.C.  It symbolizes the myth of Theseus and the Minotaur. 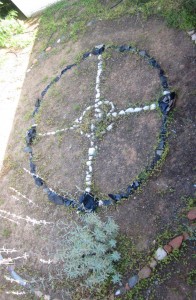 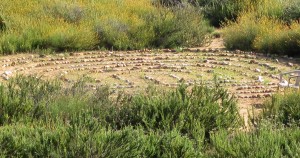 The labyrinth lets people walk together and separately without agreeing on anything.

Generally there are three stages to a labyrinth journey:

Each time you walk the labyrinth you become more empowered to find and do the work you feel your soul searching for.

Healing is an inside job which is exactly how labyrinths function.

Walking in a labyrinth is a gift we give ourselves.

Come walk with us. On the monthly Full Moon night- walk with us as the Moon lights the path and celebrate the circle in ritual in the center of the labyrinth- $20 donation.  Or arrange a personal labyrinth visit by appointment- $10 donation.